Our employees:
engaged players in
the Group’s transformation

Employee engagement is a key factor in Rexel’s success. The Group has been making an active, concerted effort to identify, evaluate and improve the driving forces behind this engagement. The year 2015 marked an important step in this direction with the roll-out of the Employee Value Proposition, the 2015 Satisfaxion internal opinion survey, and multiple related initiatives to strengthen employee engagement in the long term.

In 2014, Rexel surveyed 130 employees in 10 countries in order to identify their common experiences as employees. This bottom-up approach resulted in five employer promises, thus forming the foundation of Rexel’s employer brand, the Employee Value Proposition (EVP). Representing a differentiating factor outside the company, as well as a demonstration of internal cohesion based on common pillars, the EVP campaign is a powerful signal sent by the Group to attract and retain talents. 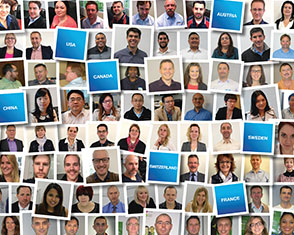 THE EVP AT THE CORE OF REXEL’S STRATEGY 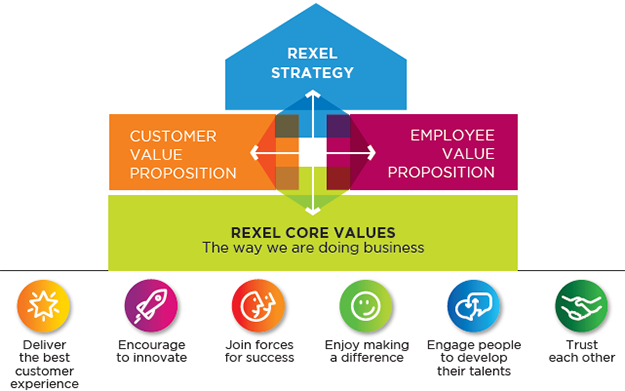 The employer brand is based on the five following promises illustrated by our employees’ statements:

Leading global companies stand out for their business performance as well as for their organizational health. In order to do likewise, the Group: 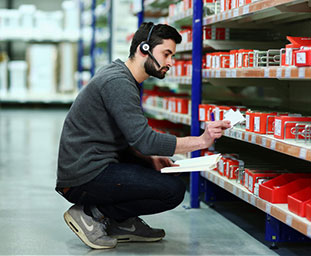 In 2015, the objective was to spread the Employee Value Proposition throughout the Group and to enhance it by analyzing the disparities between the five promises and their perception by employees via the Satisfaxion survey and workshops organized in each country. The fifth internal opinion survey, Satisfaxion15, was conducted among more than 27,000 employees in 30 countries, representing 98% of the Group’s employees, with a participation rate of 69% (+7 bps vs. the previous survey in 2013).

Among other things, this survey provided a means of measuring the way in which the EVP promises were experienced within the company. Two of them already stand out as firmly established realities in the daily lives of employees, 83% of whom feel, for example, that they can effectively “make a personal impact,” which confirms the strength of Rexel’s entrepreneurial culture. Furthermore, 77% of them also state that they “work with a great team,” reconfirming the solidity of Rexel’s collaborative culture.
In general terms, the results of the 2015 survey are stable compared with those of 2013. The most improved category is the company’s image: respondents feel they are well informed about Rexel’s ethical commitments (81%) and its core values, representing an improvement of 10 bps with respect to the previous survey on this point. In the engagement category, the statement “I fully apply my skills and abilities at work” received 90% favorable responses, a rate that exceeds the HP (High Performance) standard.

Organized for the first time between May and September 2015, the Global Corporate Challenge (GCC) confirms the Group’s team spirit and dynamism. Bringing employees together around the topic of wellbeing in a fun and original way, the GCC focused on three areas: physical exercise, eating habits and sleep quality. The principle was simple: participate in a 100-day competition in groups of seven and take at least 10,000 steps every day, like the World Health Organization (WHO) recommends. According to the results of the Satisfaxion15 survey, the countries that participated in the GCC yielded significantly more favorable responses than average to questions relating to “wellbeing”, one of the pillars of long-term employee sustainable engagement.

Rexel’s approach to ethics is a continuous improvement process and is based on principles shared by the Group’s 28,000 employees. It helps safeguard the Group’s reputation and strengthen its partner’s trust, thus contributing to its sustainable growth.
The implementation of this policy is supported by the Ethics Guide, which is distributed to all employees and specifies:

In 2015, Rexel inaugurated the Rexel Academy, a digital learning platform whose purpose is to manage long-distance training sessions across a wide variety of media (blended learning). Available to all employees, the Rexel Academy is intended to mutualize training and become a vehicle for the Group’s expertise and culture.

In early 2016, the Rexel Academy was available in 11 countries, representing 20,000 employees. It will be implemented in six additional countries in 2016. Part of the content was developed in partnership with Crossknowledge. Several courses in the areas of management, communication or wellbeing in the workplace have already been implemented.

In late 2015, energy efficiency modules were added to this generalist offering, with three different levels according to employee profile and experience. 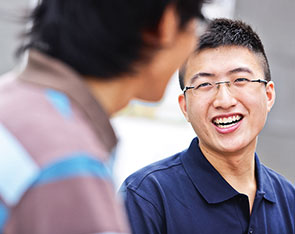 In 2015, the Rexel Academy began the preparation of a major training program on “Customer Centricity.” This subject is all the more important as the correlation between customer satisfaction and employee engagement has been demonstrated, most notably by a survey conducted among a large customer panel. An introductory module has already been developed and an initial MOOC (Massive Open Online Course) is in preparation. Based on the Group’s areas of expertise, especially those of its subsidiaries Platt (US) and Rexel France, which are experts in this field, the initial target audience is the 2,300 operational managers of teams in direct contact with customers.

Introduced in 2015, the first comprehensive safety campaign illustrates the constant attention paid by the Group, beyond its legal obligations, to the health and safety of its employees. Designed as a means of support and a complement to policies implemented in each banner, this initiative has three goals: guarantee a safe work environment, build a culture of shared responsibility, and ensure employee engagement by sharing best practices. In May 2015, the Group’s safety standards were shared across all Rexel operating countries.

The campaign “Be safe. Be responsible.” which revolves around 10 safety principles, was also rolled out in 2015 in the 115 distribution centers in the Group’s 35 countries. The campaign represented a powerful lever for raising employee awareness: the frequency of accidents in distribution centers decreased by 17% between 2014 and 2015. The campaign ran from January to June 2016 throughout the Group’s headquarters and branches.